More than four decades after it was dedicated, a memorial to Granada Hills residents who served during the Vietnam War has been updated and refurbished by a student born 20 years after the fall of Saigon.

The renovation was inspired by the reconstruction of a similar monument at the intersection of Zelzah Avenue and Chatsworth Street in Granada Hills, known as the “triangle.”

“When the `triangle’ was re-done last year, I noticed that some of the names on the plaque at the high school library did not match those on the triangle, and vice-versa,” said Doug Smith, 17, a senior at Granada, which serves roughly 4,200 students in grades 9-12.  “I needed an idea for my Eagle Scout service project (and) after we started looking into it, the interest and support from the school and our community really snowballed.”

The renovated memorial will be re-dedicated in a ceremony at 12:30 p.m. Friday, May 25, and Smith is seeking out relatives and friends of those honored to participate.

The renovation will add the names of six young men that did not make it onto the high school’s memorial when it was dedicated in the 1970s. It is unclear why some were listed and others were not, but may stem from the fact the high school serves other communities besides Granada Hills, and that some students who lived in the area may have graduated from neighboring John F. Kennedy High School after that campus opened in 1971. 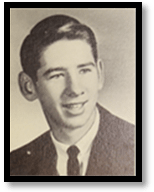 Along with new bronze plaques for the missing six, the project includes cleaning the 17 existing nameplates, as well as adding a tile mosaic of the U.S. flag.  Materials and labor are being provided through donations and a grant from the Granada Hills South Neighborhood Council, an elected volunteer town council that serves the area. The memorial has been approved by Smith’s scout unit, BSA Troop 92, and the board of Granada Hills Charter High School, and has been supported by Veterans of Foreign Wars Post 2323.

One of the young men to be honored is Frank Allender, who attended Granada Hills High and enlisted in the Marine Corps after graduation, serving as a helicopter crewman in Vietnam. He was killed in 1967, when his aircraft crashed due to a mechanical failure. Allender was 20.

Smith said renovating and expanding the monument is only fitting.